Notice: Function add_theme_support( 'html5' ) was called incorrectly. You need to pass an array of types. Please see Debugging in WordPress for more information. (This message was added in version 3.6.1.) in /home/rgkwjzk9j6ki/public_html/wp-includes/functions.php on line 5833
 About - Spankys Bar & Grill 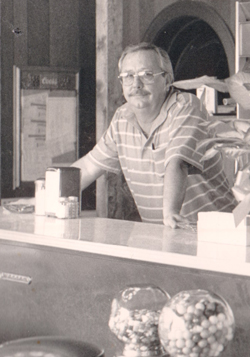 Spanky’s restaurant was established on February 28, 1989 by Eddie Le Moine, Mike Le Moine and Joe Heinen. Spanky’s original concept was to be a bar-b-que restaurant, but roughly a year later, that concept began to change. We started developing new recipes and adding new equipment in order to satisfy our customer base.

We started off slowly by adding hamburgers, shrimp baskets, and other similar menu items. As time went on, we remodeled and upgraded our atmosphere to make Spanky’s more inviting to our customers.

In 1993 we added a full service bar which offered the general public a nice place to meet with friends and family. In 1999, Eddie and Mike Le Moine bought Joe Heinen’s shares of the business. We then remodeled again and expanded the restaurant sitting area to accommodate our growing number of customers.

We continued to grow and to become one of Orange’s favorite restaurants. In May of 2003 Mike’s dad, Eddie Le Moine, died of cancer leaving Mike with the task of taking care of the family business.

On September 24, 2005, hurricane Rita stormed into town bringing massive damage to Spanky’s and the surrounding community. As Orange struggled to come back so did Spanky’s. For about a month, Orange struggled to piece things back together and restore the services that we all take for granted.

Slowly but surely we accomplished these tasks one by one. Mike Le Moine opened the bar portion of the restaurant about two weeks after the storm in order to provide a meeting place for those who stayed through the storm and those who were working so hard to repair Orange. He also installed a satellite so that customers could watch the Houston Astro’s march their way to the World Series against the Chicago White Sox.

During this time we started rebuilding Spanky’s. We totally remodeled the dining rooms and rebuilt the entire kitchen. We modernized the kitchen, buying all new updated equipment and expanding its size to make it run more efficiently. In total, Spanky’s was closed from September 23, 2005 to January 11, 2006.

I don’t know about the rest of Orange, but we at Spanky’s are really glad to be back and to have been lucky enough to survive hurricane Rita.

Thank you for visiting the Spanky’s website. We hope to see you soon!